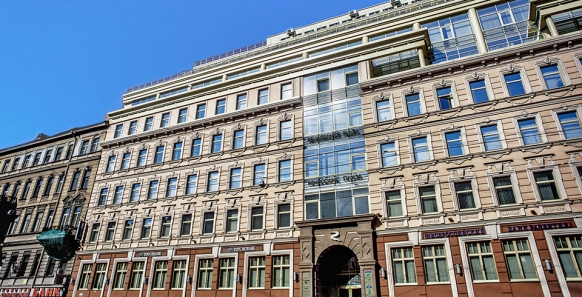 The Ural Bank for Reconstruction and Development (UBRD) leased an office with an area about 700 sq. m in the A class business center »Renaissance Plaza». On December 18, 2017, the bank will open a new flagship office in which it will serve both individual clients and legal entities. IPG.Estate performed as the broker of that deal.

The Ural Bank for Reconstruction and Development (UBRD), incorporated in September 1990, is one of the largest universal banks in the country. It is listed among TOP-30 Russian banks by CBR. It has an extensive network of 183 branches covering 42 regions in Russia. Currently, 5 branches are operating in St. Petersburg, namely, «Ozerki» (Engelsa ave., 115, cor. 1, lit. A), «Komendantsky» (Ilyushin st., 1, building 1), «Sredneohtinsky» ( Sredneochtinsky ave, 51/13, lit.А), «Budapest» (Budapest st., 46, lit.А) and «Saint-Petersburg» (Vladimirsky ave., 10).

«Renaissance Plaza» is one of the largest A class business centers of St. Petersburg with the total area about 36 thousand square meters.It is located in the historic part of the city in the very center of its business activities in Marata street, 69–71.

According to Alexander Kazansky, the director of Saint Petersburg branch of Ural Bank for Reconstruction and Development, the relocation was due to the strengthening of the bank's position in the North-West region, as well as improving the quality of work with legal entities, which is one of the main company's priorities. The company was in search for a new office during 3 months.

«The tenant was looking for a new modern representative office on the first line, - said Andrei Svistunov, development director at IPG.Estate. - In a short time, we managed to find the most appropriate office, which matches the main parameters in terms of running the business processes of the bank, and in terms of location, which served as an additional advantage of the facility.»